(This article first appeared in September 2013. Graphics of the car have since been changed.) 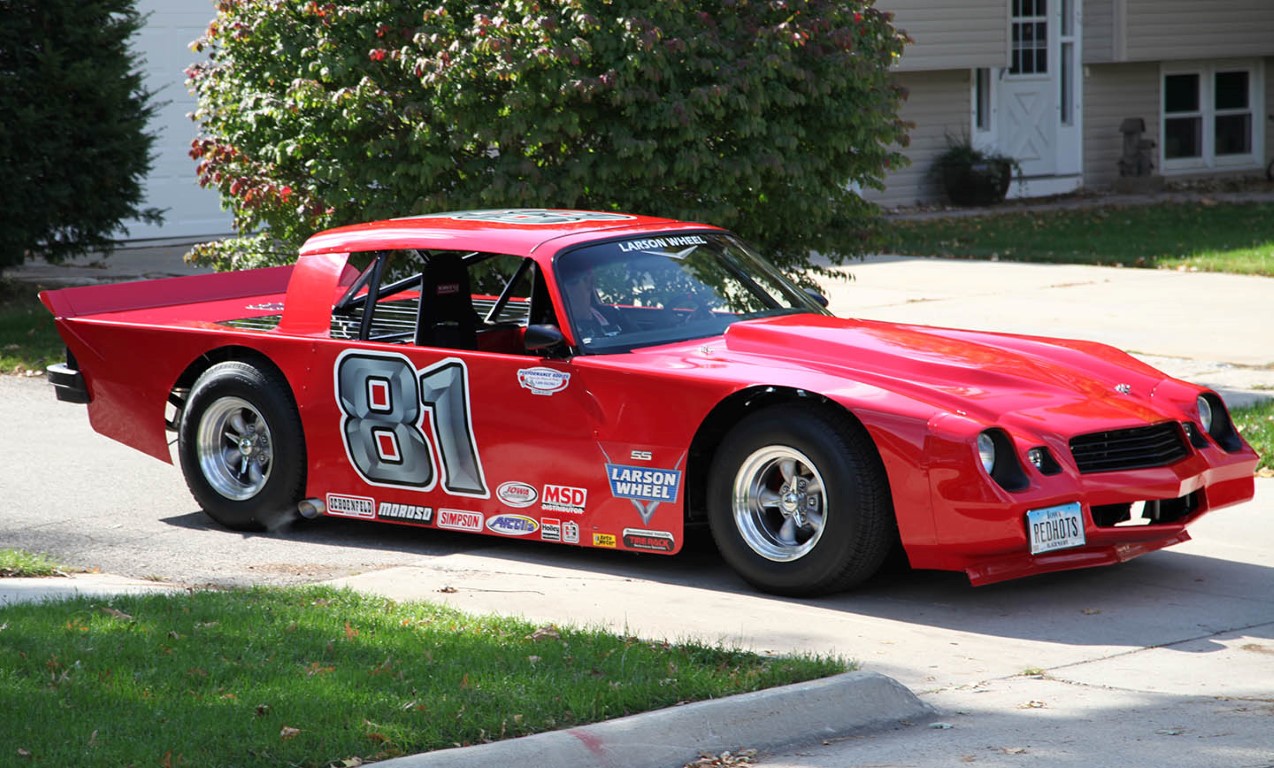 A true gearhead can point to some seminal moment when he or she was struck by an unexplainable epiphany. That moment when you knew things had changed and suddenly every motorized creation became a point of interest. It was that one time when you realized you’d never again look at any vehicle of transportation, play or collectability without the quickening of your heartbeat and a shortness of breath.

With no welding experience Keith Larson not only learned the art but assembled a complete race chassis as the base for his Camaro.

For Cedar Falls gearhead Keith Larson, it was a walk past a car dealer’s lot in the late 1960s where a ’64 Chevelle dirt track car resided, painted up in red, white and blue and sporting all the proverbial race car stuff…full roll cage, stinking big tires, cut out fenders.

The race car didn’t make Larson want to go racing, however. His young mind thought, “Wow, wouldn’t it be cool to drive something like that on the street?” Speed forward 44 years and Larson has his “mechanical symphony on wheels”, but it was an 18 year journey only a gearhead could understand.

A race car on the street? Yup, it’s been done many times, but probably not with the attention to detail and the fine points Larson has invested in this one. He began the project once, ran out of space and patience and scrapped the project, except for some key components. It was in 1994 the project took hold and Larson started in earnest the quest to make this dream a reality.

“I tried to take a retired ’77 Camaro dirt car in 1986 and convert it to street use,” he explains. “I knew the car, found it intact in a junkyard and tried to mate a 1970 Camaro SS body to the chassis.” Larson found the task daunting at best and a family move to a different house and smaller garage pretty much killed the attempt.

“I kept a lot of parts of that race car, but couldn’t quite get the job started the right way,” he says. In ’94 things changed again, this time in favor of another attempt at “the dream”. Larson bought 400 feet of steel tubing. If he couldn’t adapt a chassis, he’d just build one. Of course, he’d never built anything like this before, but that fact wasn’t going to stop the effort.

Bolting two I-beams to the floor of his garage, Larson built a jig for the foundation of the car. With help from a friend he drew up exactly what the chassis would look like with full dimensions and hung the drawing on the back of his walk-in garage door. “I used the Camaro sub frame I had saved and built a full perimeter frame of 2x3 .120 gauge wall tubing,” he describes. “Once that was in place I went after the rest of the cage.”

Endless brackets, mounts and configurations followed to engineer what Larson had essentially dreamed up in his mind and on paper. “I had to figure out how to make everything work together and spent nearly 6 years working on it (the chassis), one piece at a time,” he says. When you look over the car, you can tell he literally planned every single connection, weld and bend after a lot of thought.

“I probably have about 3000 hours in the car and half of that time was spent just trying to figure out what to do next.” Working with no instructions other than his own ideas, Larson, in classic gearhead fashion, made use of basic tools on a limited budget. “I bought a used MIG welder, chop saw and angle grinder,” he says, “and eventually had to have a mechanical tubing bender, an imported box and pan sheet metal brake and I managed to borrow a bead roller.”

Describing six years of labor can’t handle what had to be thought through every time Larson approached the chassis for another session. But he did get it rolling and on the ground. “I knew some people over at Performance Bodies in Cedar Falls who could help me with the next step so I headed their direction.”

Performance Bodies is a local company started in 1981 by Cedar Falls racer Scott Braun who was a dirt tracker himself on the local scene. He discovered he could build, and sell, aluminum body panels to racers like himself. The company has grown to nationwide size, today handling all types of body parts and other components to keep racers supplied throughout both the racing and building seasons.

The rolling chassis was twice taken to Performance Bodies where fabricator Jeff Higgins began forming up the body. The car was delivered in both 2002 and 2008 so Higgins could mock up panels that eventually ended up in the Performance Bodies catalog so Larson’s Camaro became a prototype test bed in addition to slowly making it’s way to completion as a street driven vehicle.

In addition to the 90 pound aluminum and fiberglass body produced to cover the chassis, the original donor car provided a myriad of pieces including the front nose which had to be channeled and set back in order to arrive at the proper dimension. The car’s windshield frame and upper dash panel (including the car’s VIN plate) were incorporated along with lights, horn, turn signals and 4-way flashers.

The pre-painted panels produced by Performance Bodies kept the total paint and powdercoating budget at less than $600 for the vehicle which tips the scales at about 2900 pounds. Including tools purchased for the project, Larson figures he’s into the car for $15,000. “Spread over 18 years I figure that’s not too bad considering what I ended up with,” says Larson. “The car drives great, rides good and corners like a race car is supposed to and I’ve not even done any adjustments yet to the suspension.”

All of the fabrication inside the car came from Larson’s own hands. “My Dad was a John Deere engineer,” says Larson, “and he grew up on a farm in Kansas where there wasn’t a corner parts store where you could find what you needed. You simply learned to make it.” He obviously inherited that particular fabrication gene when he used galvanized steel for the firewall, transmission tunnel and exhaust heat shield that blocks the 3” chambered exhaust that is snaked through the door panels.

“My family included a bunch of uncles who loved nothing less than flying down dirt roads as fast as they could. I remember that well.” Larson’s family landed in Cedar Falls, Iowa when his Dad went to work for John Deere. “I started at John Deere myself right out of high school, but military service (in the Navy) called and I went to California which was car heaven for me.”

Larson worked on a series of his own rides during his Navy stint as an electrician including Corvettes, a Chevelle SS and a 1959 Mercedes. “We could work on cars at the base hobby shops for 50 cents a day,” he explains. “That pretty much got me hooked into all kinds of vehicles.” Upon discharge Larson headed back to Iowa, eventually taking a job again at John Deere, retiring after 37 years as an electrician. Now he runs a custom wheel and tire service in town and drives the Camaro to local area car gatherings when he can.

“I have about 200 miles on it,” he says and explains his need to test all the car’s systems before he embarks on anything that is much more than a safe towing distance from home. “I know the car is right, but it just takes a bit of time to get used to how it functions on the street.” In the meantime Larson gets to hear that “mechanical symphony” whenever he wants. Here’s hoping we get to see a lot more of it at future events and gatherings. It’s guaranteed there won’t be anything else like it when he arrives.